He Is A Song 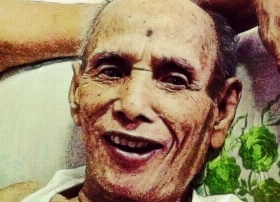 A sword of Light hand-made by God,
A hero to a numerous souls including his own
That his name is called forth a plenty
By countries united and tried
He is a league of nations on his own
With a radiant flag in poetry’s form
Storms of all sorts he did and would overcome
From sand and sea and where ever storms may be
This man, however,
Is more than a hero and more than an art to me…

In orients grand, and missions grander
He fulfills the good will of the Supreme Being
With the devoutest of brothers and fathers beside
Or as himself, a man of wonders to the right Law abides
Distinctly determined, actions squared by virtue’s square,
To mankind,in due bounds, rests his fire
Desires circumscribed and intent laid on ground
He humbles himself and Lords through service all lands
This man, however,
Is more than king and more than a knight to me…

Viably and profitably in any endeavor
The lives around count the most and weigh the most
His heartbeats’ glee math gave up calculating
And power of spirit Time deemed untouchable
He surely has stopped sacrificing and became the sacrifice
That love so pure unleashed the liveliest of divine sustenance
He strides with clouds and their shadows across all Earth,
Being nothing less than a blessing the Lord wants him to be
This man, however,
Is more than a blesser and more than a blessing to me…

A dragon no common myth could tale-tell, nor science disprove
And a bull no limited tradition or blood-dressed cloth accord
A glorious being that has risen above impossibilities
Who could wear crowns and not forget to let his bare feet touch the grass
No slave bound to the Illusion of three hands on figures
Yet his eyes sparkle out the gold and crystals where you’ll find them.
And he knows too much the truth of souls that masks do show
More than the human’s limited molding of its withering face
This man however,
Is more than a human and more than a soul to me.

He makes the stars worth wishing on
When he places them in my eyes, oh I don’t know how…
He could cast Hell frozen and its torments turn to bliss
No matter how often those firmaments attempt invasion on me
He gave me Life that no death can ever end
And Love that no hate can ever break or bend
His blood fuels my heart and his heart is a force of my soul
He is my friend, my protector, and Father above all
This man forever
Is more than anything and more than everything to me.

What lures your senses?

Message from the Poet

Dear Soul, I am happy that you have entered this realm and the thought of another connection my conscious mind may never know is inspiring and wonderful. I wish you are able to find and make beauty and good of the things you come across. It's funny how fate is considered to be subjective when there is a saying "there is a REASON for everything". God bless your senses.